A stone fork born in the field

Founded by Marcel Cyr in Saint-Elzéar, Quebec, today Fourche CYR enjoys a solid reputation for the unique design and exceptional quality of its toothed forks.

For more than 25 years, Cyr farmed his grain fields. After selling his land to his neighbour, he enjoyed driving his neighbour’s excavators and maintaining his machinery. Cyr was an ingenious and meticulous tinkerer, and sold his first forks to his entourage of farmers and wasted no time in increasing orders. He ended up designing a high-end stone fork that fits both farm tractors and excavators of various sizes, which is the CYR fork that we know today.

In 2019, three new owners took over this specialized business. These were Kevin Courtney, his wife Carine Lessard and neighbour Patrick Faucher. The business is now located in Saint-Odilon-de-Cranbourne, in the premises belonging to the Agence mécanique Courtney.

The land that unites them 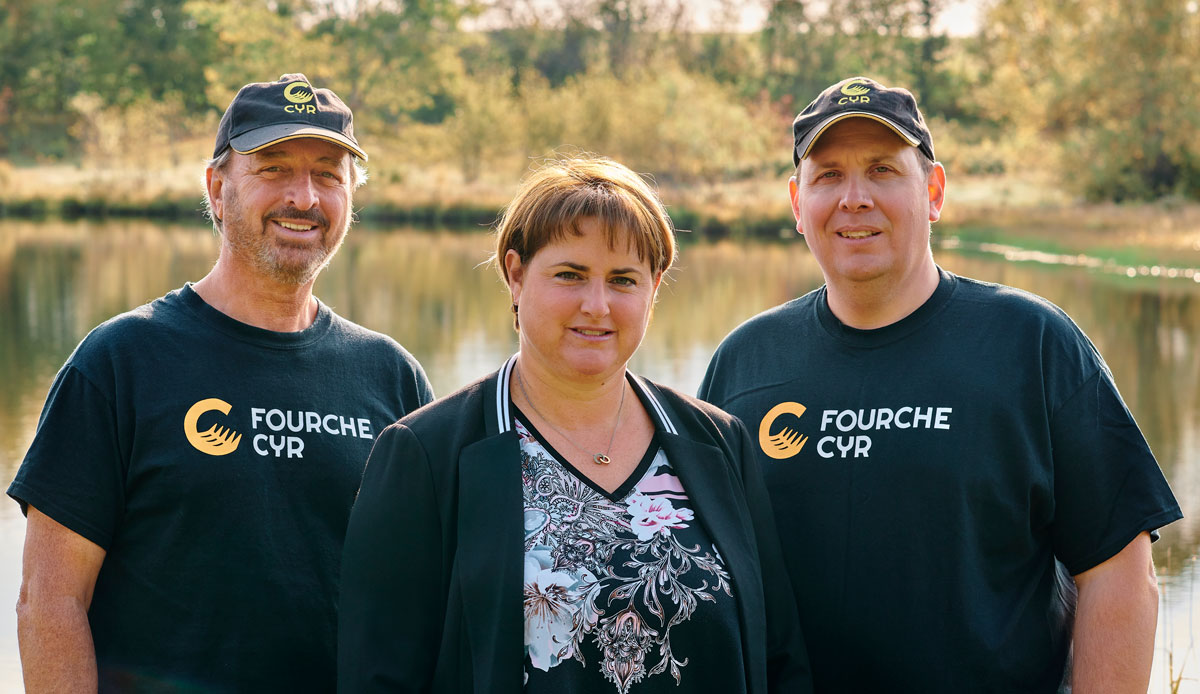 The story began when Faucher purchased land in Frampton, opposite to lot Courtney inherited. A trained tractor mechanic, Courtney got to know his neighbour well while repairing his farm equipment out in the field. Ties were quickly forged and Courtney was quick to discuss his aspirations to acquire Fourche CYR, which was seeking a buyer. His mechanical company was experiencing strong growth, so he needed additional financial support. Faucher, who was involved in business mentoring, provided support. He began as a mentor, and then moved on to become co-owner in the Fourche CYR adventure!

The new owners are looking to continue with the existing business model by transferring knowledge in terms of manufacturing and management, with Mr. Cyr never being too far away. They see great opportunities for growth, the creation of new markets and also exporting outside of Quebec in the coming years.

Faucher graduated in civil engineering from the Université de Sherbrooke in 1978, and began his career as a Plant Engineer at Iron Ore Cie in Sept-Îles. In 1980, he obtained a Designer and Project Manager position at Alcan for the start-up of the smelter in La Baie. During his 30-year career with Alcan, he held various management positions in engineering, maintenance, production, plant start-up, continuous improvement, etc. He is now involved as a mentor and chief mentor for the SAGE group, and serves as President of Fourche CYR.

In addition to being Vice President and Field Representative for Fourche CYR, Courtney is also the President of Agence mécanique Courtney, which he founded in 2000 at the age of 24. Agence mécanique Courtney specializes in the repair of tractors and farm machinery. In 2010, Courtney began selling Pottinger agricultural machinery, Austrian products that are well known for haymaking and tillage equipment, as well as Siloking, German products renowned for feeding herds.

Lessard has been a businesswoman for nearly 20 years, as owner-operator of her own beauty salon in Saint-Odilon-de-Cranbourne. Lessard joined this project along with her husband, Kevin Courtney. She brings meticulousness, versatility and great professionalism to the task, and is responsible for managing the company.

OUR TEAM HAS BEEN SERVING CUSTOMERS FOR MORE THAN 18 YEARS!